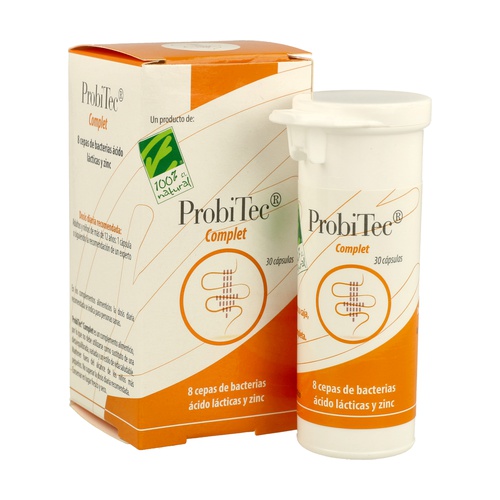 Skip to the beginning of the images gallery
SKU: LP-0058040
BW7HMVIBYMF
Store review (4.70 / 5) EXCELLENT
100% Natural ProbiTec Complet is a food supplement from the ProbiTec line, a formula that contains a select combination of eight patented beneficial bacteria.
View description

100% Natural ProbiTec Complet is a food supplement from the ProbiTec line, a formula that contains a select combination of eight patented beneficial bacteria.

Properties and benefits of ProbiTec Complet

These bacteria have been isolated and characterized at the University Hospital of Copenhagen, with more than 20 years of clinical experience in the study of these bacteria. Combined with fructooligosaccharides (FOS) and zinc.

The microbiota is the set of bacteria, fungi, viruses and parasites that live inside us colonizing the intestine and other places like the skin and mouth. We have between 1-2 kg of bacteria in our digestive tract, which is 100 trillion microorganisms or 10 times more than the number of cells in the human body. This microbiota is made up of between 300 and 1000 different species, although the majority (99%) probably come from only 30-40 species. An adequate population of bacteria facilitates, among other functions, digestive development, the normal absorption of nutrients and that other unsuitable bacteria colonize this space.

Lactobacillus: The genus Lactobacillus belongs to a group of bacteria that produce lactic acid, so named because they convert lactose and other sugars to lactic acid. The acidic environment inhibits the growth of some harmful bacteria. These bacteria are found in many foods like yogurts and cheese, and are naturally present in a healthy gastrointestinal tract. Bifidobacterium: The genus Bifidobacterium belongs to a group of bacteria that produce acetic acid and lactic acid. They are found in newborns and also play an important role in the adult population, being the most abundant genus in the intestine.