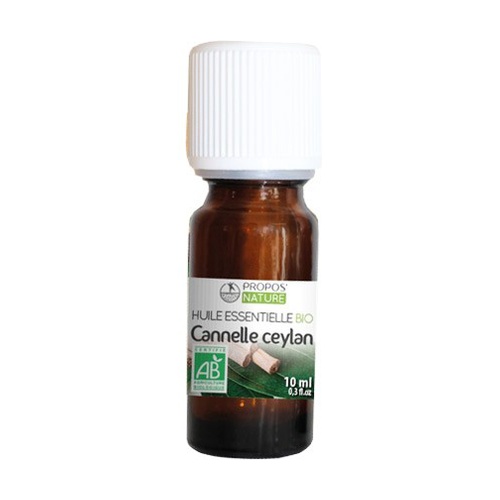 Propos Nature's Ceylon Cinnamon Oil is 100% pure and natural obtained by steam distillation of the leaves of Cinnamomum zeylanicum. Originally from Asia, cinnamon is now mainly cultivated in Sri Lanka, Madagascar, Malaysia and the Seychelles.

The cinnamon trade dates back to the occupation of Ceylon by the Dutch around 1518. Used mainly by the Greeks and Romans as an aphrodisiac scent, it is gradually used as a purifier. Cinnamon, like many spices, appeared in France when the Crusaders returned.

In the kitchen, its delicate flavor, both spicy and sweet, is used in many culinary recipes. Very powerful on the olfactory level, its aphrodisiac scent restores the smile.

How to take Ceylon Cinnamon Oil?

It is advisable to use as food flavoring: 1 drop in a dish for 5 people (never to exceed 2%). Always use essential oil diluted in a suitable medium (example: vegetable oil, honey ...).

Soluble in alcohol, fatty substances (vegetable oils and butters) and emulsions (creams). Insoluble in water. It is, however, possible to use it as a mixture in these types of products but pre-mixed with Solubol (in this case, it is necessary to add 4 times more solubol than essential oil).

Always use the essential oil diluted to 20% maximum in a vegetable oil or in another suitable medium. The essence of Cinnamon is dermocaustic, it can cause an allergy and is irritating to the skin and the mucous membranes, this is the reason why it should never be used pure but diluted in a vegetable oil. Do not use in pregnant or breastfeeding women, in children under 12 years old, or in people with epilepsy, asthma or allergic to any of its components.

Store away from air, heat and light. Store 24 months after opening.