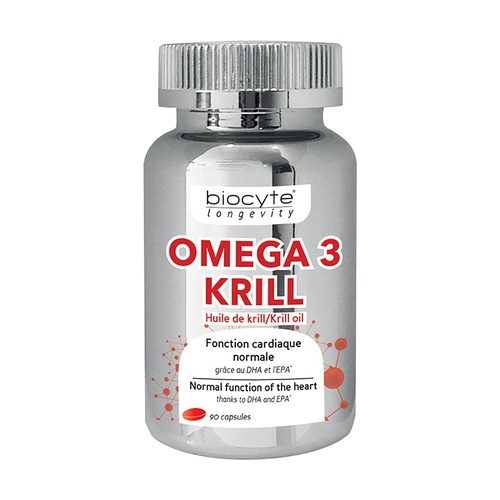 Biocyte
Omega 3 Krill
$38.26
Will be in stock soon
Need some help ?
Contact
Biocyte

Skip to the beginning of the images gallery
SKU: LP-0000625
BBFK5GGLTIL
Store review (4.70 / 5) EXCELLENT
Biocyte's Omega 3 Krill is a food supplement based on krill oil. It contributes to normal heart function thanks to eicosapentaenoic acid (EPA) and docosahexaenoic acid (DHA).
View description
$38.26
Will be in stock soon
Store review (4.70 / 5) EXCELLENT

Biocyte's Omega 3 Krill is a food supplement based on krill oil. It contributes to normal heart function thanks to eicosapentaenoic acid (EPA) and docosahexaenoic acid (DHA).

Properties and benefits of Omega 3 Krill

Eicosapentaenoic acid (EPA) and docosahexaenoic acid (DHA) contribute to normal heart function. The beneficial effect is obtained by the daily consumption of 250mg of EPA and DHA. Docosahexaenoic acid (DHA) contributes to the normal functioning of the brain and the maintenance of normal vision. There is a beneficial effect by the daily consumption of 250mg of DHA. Krill Superba ™ is exclusively extracted from Euphausia superba, a species of Antarctic krill rich in omega 3 fatty acids, EPA (eicosapentaenoic acid) and DHA (docosahexaenoic acid). A species of zooplankton invertebrate, krill move in gigantic swarms in the pure waters of Antarctica and feeds on microscopic algae, which are the main source of omega 3 in their diet. Krill contains astaxanthin, a powerful antioxidant which gives it its characteristic red color and, above all, plays the role of natural preservative for its omega 3 fatty acids. Astaxanthin preserves the freshness of krill Superba ™ by protecting fatty acids Omega 3 from oxidation, which means that no additive is needed to guarantee its long-term stability. The long chain omega 3s of krill Superba ™ are better recognized by the body because they are linked to phospholipids. This allows better cellular incorporation compared to omega 3 in the form of triglycerides (such as those present in fish and algae) which must be transformed by the liver before they can be used by the cells of the body. Thanks to these phospholipids, krill distributes the key fatty acids EPA and DHA in various parts of the human body, such as the brain, heart and joints.

How to take Omega 3 Krill?

It is advisable to take during the meal, for 3 months.

Store in a cool, dry place.