30 capsules
Skip to the end of the images gallery 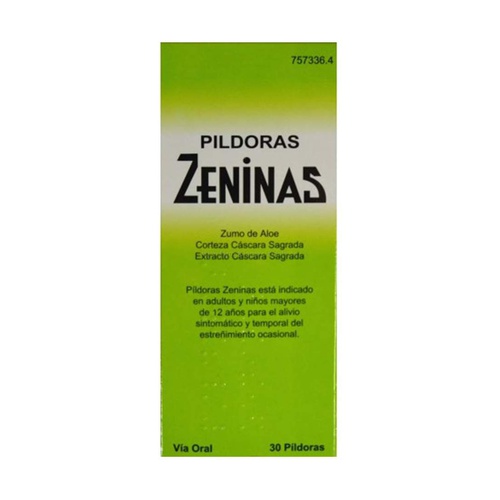 Vemedia Zeninas pills are laxative pills based on aloe and cascara sagrada. To treat occasional constipation.

Properties and benefits of Zeninas pills

This medicine has a stimulating laxative effect due to the presence of aloe and cascara sagrada. The O and C-glucosides of the anthraquinones are hydrolyzed by the bacterial flora, causing anthhrones that induce the synthesis of prostaglandins, which stimulate intestinal peristalsis, by increasing intestinal secretion of chlorine and water in the colon.

- Absorption: Anthraquinones are very poorly absorbed in the stomach and small intestine, which is contributed by the compound's own pharmacokinetics and the special formulation of the preparation, which prevents it from breaking down until it reaches the colon. Only a small portion is absorbed.
The effects appear at 8 o'clock.

- Metabolism. Anthraquinones are metabolized with conjugation, giving rise to sulfated and glucuronated derivatives.

- Elimination. They are mainly excreted in the faeces. The small absorbed fraction is eliminated by metabolism, with metabolites appearing in urine.