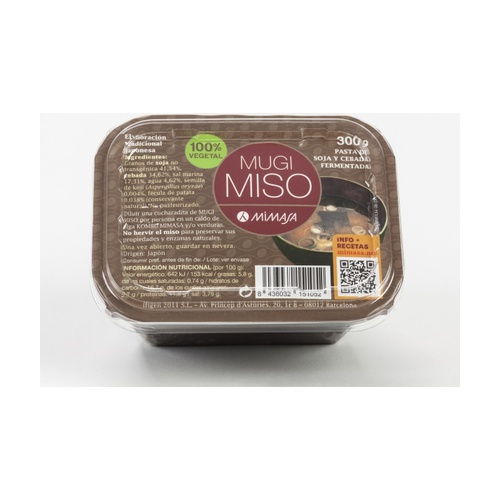 Skip to the beginning of the images gallery
SKU: LP-0001104
B9URMB35BA7
Store review (4.70 / 5) EXCELLENT
Mugi Miso + Mimasa Barley, is made with soy mixed with barley and is characterized by having a sweet taste, despite the fact that sea salt is also used in its preparation.
View description

Mugi Miso + Mimasa Barley, is made with soy mixed with barley and is characterized by having a sweet taste, despite the fact that sea salt is also used in its preparation.

It is made with soy mixed with barley and is characterized by having a sweet flavor, despite the fact that sea salt is also used in its preparation. Koji (Aspergillus oryzae) is first mixed with barley and, when fermented, binds to soy. Mimasa mugi miso ferments for 18 months following centuries-old traditional methods, in cedar barrels at room temperature. During fermentation koji enzymes and bacteria are activated and to prevent oxidation, heavy stones are placed on top of the barrels to crush the mixture and separate the miso paste from the air and speed up the fermentation.

For the production of Mimasa mugi miso, only natural ingredients are used (non-GMO soy, barley, water, sea salt, potato starch and koji seed), for which neither fertilizers nor other chemical products have been used. The result is a product with a unique aroma and quality, very rich in nutrients. Misos in which the fermentation process is accelerated with heat lose these nutrients. The same is true when preservatives and dyes are added. We will only find digestive enzymes and amino acids in naturally fermented misos for at least more than a year, subject to fluctuations in the temperatures of the seasons.

Soy, the main ingredient in mugi miso, is rich in protein, but difficult to digest. In miso, soy protein breaks down into amino acids during fermentation, which not only makes it easy to digest, but also helps the digestive system and repopulates the intestinal flora.

Miso is the healthiest and easiest way to assimilate soy protein. All soybean grain is used in its manufacture, including the skin. In this way, miso has the added benefit of substances such as saponin, linoleic acid and lecithin, which help dissolve cholesterol attached to the blood walls. Therefore, miso helps prevent high blood pressure, plasma lipid accumulation, and stroke. It also contributes to maintaining the elasticity of the blood vessels.

It is recommended to take especially as a condiment in soups, pates, legumes and cereals. It is usually added when we have finished cooking a dish and have turned off the heat. Then we dilute a small teaspoon of Mimasa mugi miso per serving in the soup or broth. Let it rest for a few minutes and we can serve. You can also prepare delicious pates by mixing with organic tahini and water, or use as a dressing in sauces.

Keep in mind that it is not necessary to add salt because it is already a seasoning that has salt. Therefore, it costs a lot to spoil, but if we live in a warm place it is better to put it in the fridge once the container is opened. Being a ferment, it should not be boiled, since otherwise it would lose its properties.